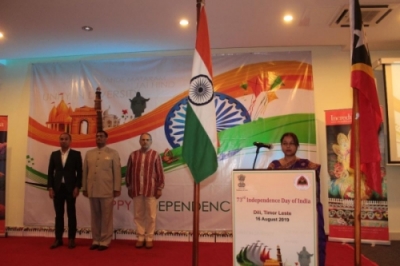 2. The gathering of over 100 dignitaries included H.E. Mr Isilio Coelho, Director General of Ministry of Foreign Affairs of Timor-Leste, along with Senior officials of the Government of the Democratic Republic of Timor Leste, members of tbe Diplomatic Community, including the Resident Ambassadors and members of the International Organizations, Indian Nationals resident in Timor-Leste, prominent Timorese of Goanese origin and members of media.

3. H.E. Mr Jose Ramos Horta, Nobel Laureate and former President of Timor-Leste also joined in the celebrations as the Guest of Honour. He had earlier contributed a special article on “What Mahatma Gandhi meant to him” – as part of a special publication brought out during the ongoing 150th Birth Anniversary Celebrations of Mahatma Gandhi. 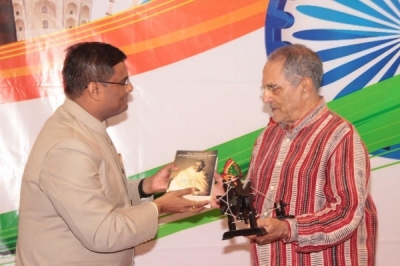 4. In his remarks, H.E. Mr Coelho welcomed the deepening of bilateral ties with India and informed the audience of their upcoming plans to open an Embassy of Timor-Leste in India very soon. Mr. Prakash Gupta, Charge d’ Affaires of the Embassy of India reaffirmed Government of India’s strong committment to the developmental partnership with Timor-Leste and recalled the warm and friendly relations that both countries shared based on an abiding commitment to the values of democracy, pluralism and diversity. Cd’A underscored that the recently commenced two developmental projects, i.e. the IT Innovation Hub at Oecusse, and the Agriculture Project of the Permaculture Centre in Aaturo Island, were both reflective of the high priority that Government of India accorded to its development partnership with the Democratic Republic of Timor-Leste. He also called on scholars and students from Timor-Leste to participate through the scholarship programmes of the Indian Technical and Economic Cooperation (ITEC) programme. 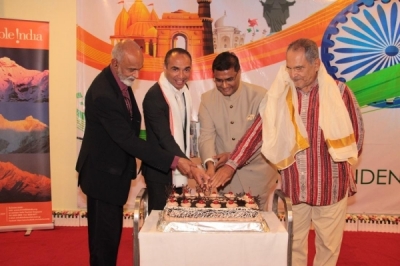 5. The National Day Reception commenced with the lighting of the traditional Indian lamp which was followed by the playing of national anthems of Timor-Leste and India. The Evening Reception was also covered extensively by local Timorese media.