Indian Naval Ship Kiltan, visited Jakarta, Indonesia, from 10-13 November 2019. The port call was part of the Eastern Fleet’s Overseas Deployment (OSD) of 2019 and also coincided with the celebrations of 70 years of diplomatic relations between India and Indonesia. The ship entered Jakarta on the auspicious occasion of Indonesian Hero’s Day after having been away from her base port Visakhapatnam for over 84 days, with visits to Thailand, Japan and Philippines as also bracing the fury of nature during typhoon Hagibis. 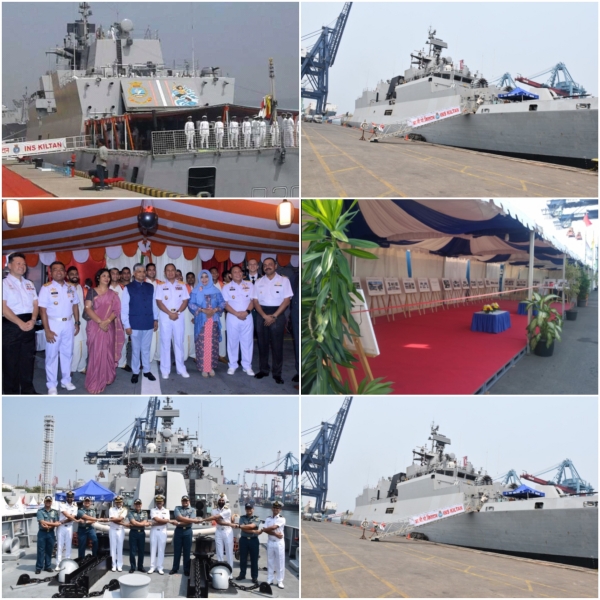 INS Kiltan commanded by Commander Ginto George Chacko, who is a specialist in Anti Submarine Warfare (ASW). INS Kiltan (P 30), is an indigenously built ASW corvette and is the third ship of Project 28, designed by the Indian Navy’s in-house organisation, Directorate of Naval Design and constructed by Garden Reach Shipbuilders & Engineers, Kolkata. The ship was commissioned at Vishakhapatnam on 16 Oct 2017 by the then Indian Minister of Defence, Smt Nirmala Sitharaman.

IINS Kiltan takes its name from the Kiltan Island, a coral island that is part of India’s archipelagic Union Territory of Lakshadweep. It is the successor ship to the INS Kiltan, which was an Arnala-class corvette which participated in Operation Trident, and was later decommissioned in 1987.

The ship represents a leap forward in the Indian Navy’s target for maximising indigenisation with as much as 90% of its content drawn from India itself. Kiltan is India’s first ship to have a superstructure of carbon fibre composite material that has been integrated with its main hull resulting in lower top weight and maintenance costs and improved stealth features. The ship has a length of 109 m and displaces around 3500 tonnes on full load.

The corvette is powered by four Pielstick 12 PA6 STC Diesel engines of 4,000 hp each that were license built by Kirloskar and have the capability to propel and maneuvere the ship at a top speed of 25 knots. The ship also has a designed  endurance range of about 3,450 nm at 18 knots.

During the visit, the ship’s officers and crew interacted with their counterparts from TNI AL (Indonesian Navy). The ship was open for visitors on two days and a special visit of children from the Gandhi Memorial International School Jakarta was organised. The Ambassador of India to Indonesia, H.E. Shri Pradeep Kumar Rawat also hosted a reception on board the ship for members of the Indonesian Armed Forces, the Diplomatic Corps and Indian expat community. Vice Admiral Mintoro Yulianto, Deputy Chief of Staff, Indonesian Navy graced the occasion. At the venue, a photo exhibition to commemorate 70 years of diplomatic relations between India and Indonesia was organised by the Embassy of India, Jakarta and it showcased a historical perspective of the various instances of high level interactions since both countries attained their independence, progress in defence cooperation, bilateral exercises, HADR and medical support, interaction of defence industries etc.

On completion of the stay in harbour, the ship carried out out PASSEX with KRI Kapitan Pattimura (371) and then proceeded on her journey back towards India.